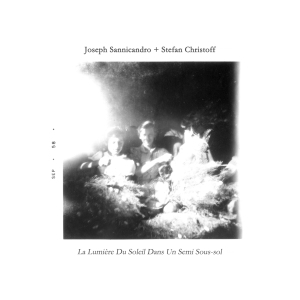 La Lumière Du Soleil Dans Un Semi Sous-sol is the third duo release with my friend Stefan Christoff. Each release has been its own project and the results are quite distinct. Les Rumeurs was made to document the Quebec student strike of 2012, comprised of field-recordings of protests and street actions we’d made independently, and tape loops of Stefan’s piano playing that I manipulated and processed. Our second collaboration, Temps de Travail, explored the arrhythmia of living out of phase with the traditional 9-5 lifestyle. That tape also reflected the sound that had developed out of our live performances, featuring Stefan playing piano and guitar and myself manipulating field-recordings and playing a synth app. But that tape also featured extensive editing and some overdubs and post-production. The same day that we finalized the mixes for Temps, we returned to Stefan’s ground-floor apartment and recorded what would become La Lumière Du Soleil Dans Un Semi Sous-sol, a raw document of our process of live improvisation. Stefan played an electric organ and I played a synth app and manipulated a portable cassette recorder, processed through a delay pedal and a looper. We set up a stereo mic, agreed on a few notes, and improvised.

Unlike our first two projects, we had no overarching concept guiding us, no political or social message, just a relaxed afternoon jam session between friends. Some samples from this original recording appeared in our live performances in Boston and Montreal in December of 2018. I had been planning on capturing some more recordings of Stefan’s organ and developing some material further, but the pandemic made that unfeasible. Early in January of 2021, I revisited that recording, chopped it into discreet sections, and changed their sequence. Stefan made some tweaks and chose the titles. Our friend Renato  (kNN) in Napoli mastered this release, which has been published on CD by the Macedonian label Élan Vital. We’ve commissioned a few videos to accompany these tracks, which will be added to this post as they are premiered. We hope to be able to organize an outdoor performance in Montreal this summer. Thanks for listening. 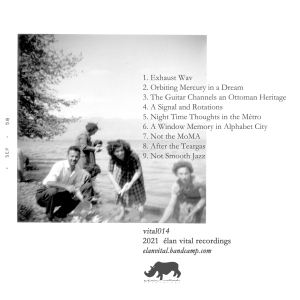 Sounds record a moment, a sliver of time in the cosmos on earth. Joseph’s field recordings recall visits to other places on the globe, recalling memories and the ways that our memory mixes with dreams, it is complicated, actually. Stefan is playing an old organ here, one gifted by Bashar, a Palestinian friend who works with a moving company in the city, the organ was going to be thrown out, so Bashar came by to gift the old organ. Stefan also is playing an acoustic guitar. This recording is based on an exchange in sound and also an exchange in friendship, in experimentation and recalling stories of generations past by two sound artists who grew up on Turtle Island, but have roots in the Mediterranean.

Stefan Christoff plays music, creates media and is a community organizer. Playing piano, organ and guitar Stefan is a multifaceted musician who also works in soundscapes. He has collaborated with many musicians and has releases coming out this year with Lori Goldston and Sam Shalabi. Hosts a weekly community radio show on CKUT 90.3fm called Free City Radio. Stefan has also been deeply involved in social justice movements and campaigning against colonial capitalist systems of injustice, from Turtle Island to Palestine, but also in the global Boycott, Divestment and Sanctions (BDS) Movement in support of Palestinian liberation. Lives in Montréal, studying history at Concordia University and has Macedonian roots.

Joseph Sannicandro is an artist and writer based in Montréal. Working with field-recordings and various recording media, his soundscapes explore the relationship between sound, positionality, and place. As a scholar, his work explores creative labor and (un)popular culture, encompassing the philosophy of technology, media theory, and institutional critique. In addition to his duo with Stefan Christoff, Joseph also records under the moniker the new objective and under his own name, as well as with the Anarchist Mountains Trio. He is co-founder of the music blog A Closer Listen, and producer of Sound Propositions, a series of audio documentaries profiling musicians and sound artists.

Son of Marketing
La Lumière Du Soleil Dans Un Semi Sous​-​sol is the new collaborative album between Montreal based musicians and sound artists Joseph Sannicandro and Stefan Christoff. It is out via Élan Vital Recordings.

Independent Clauses
“Orbiting Mercury in a Dream” – Joseph Sannicandro + Stefan Christoff. This is one of the tracks where the whole review is right there in the title. Do you want to know what this ambient track sounds like? It sounds orbiting Mercury in a dream. If that sounds appealing to you, inquire within.

Vital Weekly (1293)
Elan Vital Recordings is a “Macedonian music label releasing a limited edition of handcrafted CDs and tapes from international artists focused on obscure aspects of sound, accompanied with carefully created artwork and video art. Each release will have a limited CD or tape edition with hand-numbered and stamped artwork.” I reviewed a cassette by this before (see Vital Weekly 1171). The duties are thus divided: Stefan Christoff (acoustic guitar, piano) and Joseph Sannicandro (electronics, synth, ebow, loops, melodica, production). That is not mentioned on the cover, but then, nothing much is mentioned beyond the track titles and label information. The Bandcamp page says that Christoff plays an old organ and acoustic guitar and nothing much is mentioned for Sannicandro, but maybe he’s responsible for field recordings and sound effects? I assume these are recent recordings, although I have no reason to believe such a thing. This one seems even less politically inspired than their previous releases, or maybe it is hidden in a place we can’t see it. Of the recording, it is said that these are an exchange in sound, which could have happened in a room, but just as well they might be exchanged via the Internet. From the way the music sounds, I would say the two men are sitting in a room; a log cabin might be a likely candidate. There are a few outdoor sounds, waving through the window in the opening piece ‘Exhaust Wav’, but from there on, in the other eight tracks, microphones pick up the organ and all the sounds the machine when played, the strings on the guitar, but also the squeaking of the chairs these men sit upon. All of that cleverly mixed with what I think are extraneous field recordings, and some sort of moody electronics, which stays gently in the background, but are nevertheless ‘there’. I found their previous release, the first I heard from them, to be part of the world of post-rock, and this one is no different. Think of this as a stripped-down version of Town And Country or Ben Vida‘s earliest work; intimate music, with sparse notes, slow drifts, a bit of gentle dissonance. The music sounds like the listener sits on another squeaky chair in the same small cabin and by concentrating on the effort of listening, everything becomes audible; each sounds plays a part. This is a beautiful exercise in slow music. (FdW)