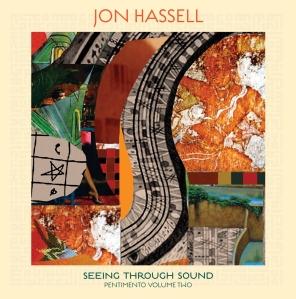 You don’t hear too many octogenarian trumpet players. The horn is a cruel instrument, in that embouchure collapse cuts many brass players’ careers short. (A good friend of mine was disappointed many a time by Freddie Hubbard cancelling a gig at the last minute.) So as the years passed following the release of Jon Hassell‘s Last Night The Moon Came Dropping Its Clothes In The Street, the legendary trumpeter’s 2009 LP for ECM, I became silently resigned to the fact that may be the final statement of an illustrious career. The release of Listening To Pictures in 2018 was thus a delightful surprise, doubly so since the record’s subtitle (Pentimento Volume One) suggested that we would not have to wait another decade for more new music from the trumpet master. Seeing Through Sound, the promised second volume, has just been released, and together the pair are as engaging as anything in Hassell’s long oeuvre. 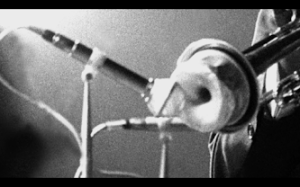 I once heard Steve Reich explain that Miles Davis‘ instrument wasn’t the trumpet but the trumpet and a microphone. Like his idol, Hassell too is very much someone whose instrument is similarly imbricated with technology, whose innovations have come from the fruitful combination of a variety of techniques and technologies. This includes the use of effects on his trumpet playing, most notably the Eventide Harmonizer, granting Hassell’s playing the ability to move diagonally between melody and harmony. But Hassell is also adept at the creative use of the studio as a compositional tool, no surprise given his association with Brian Eno.

The Pentimento series is a return to a studio-based approach, which is probably better suited to the lifestyle of an artist in his eighties. Prior to this, Hassell’s more recent work had revolved around his Maarifa Street live band. While modern technology allowed for live sampling and manipulation and electronic processing in ways unimaginable decades earlier, the live dialogue between the players was undeniable, and perhaps appropriate given the priority given to performance in an era of declining music sales. Rather than feeling confined by working in the studio, Hassell developed his pentimento technique to spur him into new territories, demonstrating that there are still possible musics yet to be discovered.

In art history, “pentimento” refers to visible elements in a painting or fresco that are traces of an earlier composition. For some artists, this is evidence of the experimental development of a work, making adjustments as necessary. Hassell translates this concept to his use of the multi-track studio, using editing and layering the way painters use paint. Musical gestures may respond to elements no longer audible, and these absent structures persist in ordering the develop of his compositions, keeping the music fresh and lively. 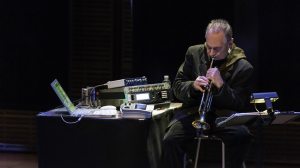 While the overall mood of the two discs is contemplative and mellow, each is notably marked by passages of driving rhythm, even reminiscent of pulsing electronic music in places (“Pastorale Vivant,”Cool Down”). The percussive elements maintain a propulsive groove, but (with some notable exceptions) tend not to remain for long, dropping in and out and constantly evolving. These mutating patterns evoke elements of minimalism and new music that have always been part of Hassell’s musical DNA, while bringing the groove from records that may have previously felt like outliers in Hassell’s discography (Earthquake Island, 808 State) into fluid dialogue with other aspects of his style.

The pentimento concept has additionally created an opportunity to revive Hassell’s long association with the late Mati Klarwein (1932-2002), the visual artist behind Miles’ Bitches Brew and Evil-Live, to name just two prominent examples. Klarwein had painted some of Hassell’s most memorable LP covers, from Dream Theory in Malaya (1981) to Maarifa Street (2005). Both Pentimento records use motifs and elements from Klarwein’s work to form striking collages that reflect the spirit of Hassell’s music: volume one with its dark background and vibrant oil slick pallet contrasted against the warm colors and light background of volume two.

Seeing Through Sound is clearly the result of the same sessions as the first volume, but don’t mistake it for a throwaway collection of outtakes. The two volumes form a larger work, but each record can stand on its own. Kheir-Eddine M’Kachiche, whose violin is prominent on Listening to Picture’s closer “Ndeya” receives similar pride of place on Seeing Through Sound‘s 8-minute opener “Fearless,” demonstrating both a sense of continuity and rupture. “Fearless” takes a strophic approach, the same looping rhythm grounding the entire track without ever feeling monotonous. It’s the kind of lilting groove you can just put on repeat. The album is book-ended by another 8+ minute epic, the more somber “Timeless,” a reworking of track originally released on 2017 Tresor compilation. Rounded out by the intervening six tracks, Seeing Through Sound proves that a digital aesthetic, full of skittering rhythms and stuttering beats, can still be grounded and inviting, particularly when the continuity is Hassell’s beautiful trumpet tone.

Throughout his career, Hassell’s playing has ostensibly been an attempt to apply the raga lessons of his teacher, the vocalist Pandit Pran Nath, to the trumpet. I say ostensibly, though it is true enough that Hassell’s breathy and lyrical playing carries a vocal quality to it. Nonetheless, to these ears the timbre of his instrument often evokes a mellow pipe organ, particularly when Hassell is playing sustained harmonies. The time stretched alien cries of “Unknown Wish” seem to hover blissfully unaware of Peter Freeman’s bass, not so much anchoring Hassell’s playing but reminding the listener that the ethereal sounds exist in a shared world.

Just because Hassell has embraced a studio approach doesn’t mean that he’s working alone. Most tracks feature two or three additional musicians, including longtime Maarifa Street collaborators: the aforementioned Peter Freeman (bass), Rick Cox (guitar, bass clarinet), and Jan Bang (live sampling). It isn’t always clear who is doing what, and knowing which instruments are credited on a track can lead to even more confusion, all the more so due to the “pentimento” approach. And that isn’t confined only to Hassell’s collaborators. “Reykjavik” and “Cool Down Coda,” not four-minutes combined, are notable in that Hassell doesn’t touch his horn at all, credited instead with “keyboards,” remarkably more so because it’s so easy to miss this fact on first listen.

Hassell performed on the original recording of Terry Riley’s In C (1968), contributed to the Talking Head’s loop-based art rock masterpiece Remain in Light (1980), and was a crucial conceptual influence on David Byrne and Brian Eno’s subsequent groundbreaking LP My Life in the Bush of Ghosts (1981). His collaborators over the decades have included everyone from Peter Gabriel and David Sylvian to Ani DiFranco and k.d. lang. But for my money, Hassell’s playing is at its best when in dialogue with skilled percussionists, such as Aïyb Dieng or Abdou M’Boup, Senegalese percussionists who contributed to Fourth World Vol. 1 – Possible Musics and Aka / Darbari / Java, respectively. And above all the great Brazilian percussionist Naná Vasconcelos, whose playing was all over Possible Musics, as well as Hassell’s two prior albums, the jazz-fusion Earthquake Island, and the Fourth World defining Vernal Equinox (both 1978). If I have any criticism of the two Pentimento volumes, it may be the absence of comparable percussionists, even if the digital studio approach does propel Hassell in new directions.

The pentimento technique isn’t wholly removed from Hassell’s earlier concept of Magic Realism. Akin to another concept from painting, the capriccio, or architectural fantasy in which monuments and buildings from different locations are brought into the same composition, Magic Realism saw Hassell combine elements from diverse musical traditions into a something novel. This idea is central to the fantastic geographies evoked by the concept Fourth World, the “coffee-colored” music first imagined by Hassell more than forty years ago.

And like Miles’ use of the microphone, Hassel’s technical innovations have come out of ceaseless refinement and experimentation. The concept remains generative for many contemporary electronic artists (from Andrew Pekler to Gonzo), but if we look more closely at the history of music we find traces of it all along. (For instance, see Michael Denning’s Noise Uprising, which tracks the emergence of a variety of new styles in port cities around the world, in response to migration and the advent of electrical recording studios.) Hassell’s dream of the “Fourth World” is doing something different, something rooted in a fantasy other than the old colonialist adventure narrative that dominated the Euro-American imagination straight up to the Exotica records that influenced Hassell himself.

Some commenters have overreacted to the slightest criticism of Fourth World with hyperbolic accusations of “cancel culture.” No, Hassell’s oeuvre can withstand a bit of criticism. Besides, imagine listening to “Empire I-V” and still thinking that Hassell’s Fourth World imaginary is mere hedonistic exotica blind to real world conflict. But there is no doubt that, three decades after the end of the Cold War, the “Fourth World” concept sounds somewhat awkward to contemporary ears. Still, these two recent volumes have demonstrated that there is still potential in these possible musics. (Joseph Sannicandro)

Brian Eno has also set up a GoFundMe page to help Hassell out during during the pandemic. Please consider donating if you are able.