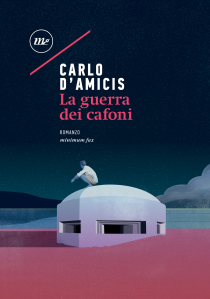 I’ve noticed that film audiences are more sensitive to “spoilers” than literary theorists, so I will just say a few words about the title of this film to restore some of the context lost in translation. La Guerra dei Cafoni. Released in English as The War of the Bumpkins, the choice of “bumpkin” for cafoni may be too regional to convey the full weight of the film.  This is a common problem for foreign language films, though some translations do more violence than others. Vittorio De Sica’s 1948 masterpiece Ladri di biciclette (Bicycle Thieves), is decidedly in the plural. The mistranslation in English into the singular does much to psychologize the lead character while masking the profound truth of the film:

Theft is often the result of a deprivation.

Theft is caused by a previous theft, an originary theft which sets the wheels of inequality spinning. La Guerra dei Cafoni  begins with such a prehistoric, originary theft as a kind of parable for the continual class struggle with characterizes human history and against which the rest of the film is set. It is a theft in which a landed class claims ownership over that which is most public, which literally falls from the heavens: water.

“The Heavens belong to everyone.”

“Nothing on this earth belongs to you, cafoni”

With the “theft” of water the world is already upside-down.  It is a crime to drink water, but not to claim ownership over a well. Beyond this opening parable, water is a recurring symbol throughout the film, water for drinking, transportation, fishing, leisure, war…

La Guerra, the ‘war’ of the title, is a recurring conflict between feuding teenagers. But this is not an ordinary war. These are not Montagues and Capulets, a “good” and “bad” noble House in opposition to one another. It is Signori versus Cafoni. “La Guerra dei Cafoni.”

Cafoni is harder to translate than guerra, of course. The War of the Bumpkins. The Yokel War.  Both translations are inadequate, though the general sense is clear enough. These are not cultured folks, they are “folks,” they are il popolo, there is something of the vulgar masses about them.They are not even the cosmopolitan masses, there is something decidedly non-urban about them.

Initially a more or less neutral word, akin to contadini (the poor peasant stock from which most Italian-American immigrants descend), the word evolved into a general adjective meaning something like uncouth, boorish, ill-mannered. An Italian friend confidently informs me that the word has “ca fune” as its original, meaning “with rope.” That is, those who are too poor for belts and whose pants are instead held up by rope. Though this may very well be a false etymology, it does signal the common association Italians have with “cafoni.”

I contadini might be described as “I contadini cafoni e maleducati,” rude peasant farmers. Perhaps it is this term, peasant, that best carries into English the class connotation of the word cafone. It is from the word cafone that the Italian-American slang word Gavone is derived, something non-Italian-Americans will have encountered in the Sopranos. The related stereotype of the crude, sexist, and violence-prone “gavone” carries with it a sense of vulgarity. For this reason, it is worth comparing cafone to the even more derogative term terrone.

“Terrone” began as a relatively neutral term to describe the landowning class of the south following the “unification” of Italy in the 19th century, but it became a slur for southerners, especially those who migrated to the industrial north in the ‘50s and ‘60s. Think of the reaction of Milanese ladies to the migrants arriving from Lucania in Visconti’s Rocco e i suoi fratelli (1960), to give just one cinematic example. Terrone is a derogatory term of the Italian language to designate an inhabitant of Southern Italy, and cafoni is deployed here in much the same way.

The Neapolitan hip hop group 99 Posse, has attempted to enact a revaluation of the term as a point of pride, as in the song “Gente do Sud” released under the collective moniker Terroni Uniti. This potential regional valence to the term is an aspect of cafoni that can be easy to miss. It is no mistake that the leader of the little Signori goes by the name of a Brazilian soccer player, a footballer best known for his flowing curly blond hair. The word  therefore carries with it something of the conflict between North and South.

While I can’t be certain that the authors intended for this reference, “La Guerra cafona” is also the Northern name for the decade long war staged by southern Italian insurgents in the wake of the unification of the Italian peninsula in 1861. The city of Napoli experienced unification as a loss of independence and wealth that they had enjoyed as the center of their own kingdom. That freedom was relatively brief, as the south has a long history of conflict against both internal and against external powers, the House of Savoy simply the latest in a long line of oppressors. “The Cafona War” allowed the North to frame the violence as a conflict between the civilized and the barbaric, utilizing colonial methods to control the south and transform it into a Piedmontese province.The North characterized the anti-unification insurgents as Brigands, in terms of bands of savage and petty criminals, depoliticising their struggle against the violent process of unification and the pilfering of southern resources to the benefit of the industrializing north. As Silvia Federici reminds us, Marx has given us another name for originary theft: Primitive Accumulation.

Thus “cafoni,” a term for poor, rural folk was thus transformed by this association with brigandage, and has come to signify  ‘primitive,’ ‘barbaric,’ ‘uncivilised,’ ‘vulgar,’ and ‘backward,’ meanings thus mapped onto southerners in general, even if not deployed exclusively in this manner.  And this is not just about squabbling over language. In the late 19th century, criminal anthropologists like Cesare Lambroso, part of a school of Meridionalisti (Southernists), worked to prove the congenital inferiority of southern Italians using pseudo-scientific eugenics and phrenology. And let us not forget that Lambroso’s ideas about inherited predispositions toward criminality proved very influential here in the United States, where he is still venerated as the father of modern criminology despite his racist theories being widely discredited. 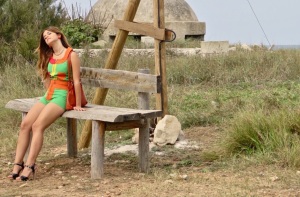 La Guerra dei Cafoni is set in 1975, a fact which remains very much in the background, however. The year is only hinted at, cues given mainly by fashion and technology.  The radios and walkie-talkies and pinball machines and cars and bathing suits. But this was  another period of intense political struggle across Italy, a fact which may grant the film additional weight.

Directed by Davide Barletti and Lorenzo Conte, La Guerra dei Cafoni is based on the eponymous novel by Carlo D’Amicis. All three hail from Salento, Puglia, a peninsula on a peninsula, where the story is set and where the film was shot. The directors’ debut film was also set in Salento, and their second profiled director Ettore Scola, whose Brutti, sporchi e cattivi  [Ugly, Dirty and Bad] (1976) tells the story of a Pugliese family living in an extremely poor shantytown on the periphery of Rome in the 1970s. That film, which won mise-en-scene prize at Cannes, is some of the best filmic evidence of the informal architecture of Rome’s post-war periphery, the result of corruption and lack of planning as vulgar as the lives of the film’s subjects.

There is a concern for the  sub-proletariat (sottoproletariato) in all these works that should not go unremarked. Despite not being landowners, the  titular cafoni have strong ties to the land, as do the signori. At one point a boy of the Signori asks his leader:

“And you are still sure that we are us and they are them?”

“Each has his place in life.”

Masters/slaves, good/evil, Signori/cafoni. The film asks if and how it might be possible to break this cycle. Enjoy.

These remarks were delivered at the Italian Film Festival in Minneapolis, Minnesota on 23 February 2018.