Esther Bourdages is an art critic, radio journalist, independent curator, and musician based in Montréal. She is an improviser of extraordinary sensitivity, bringing a playfulness to her tactile manipulation of vinyl records, sometimes outright mishandling them. This freedom to destroy is indicative of a resistance to structure and formalism, but Esther’s work can’t be easily dismissed as some sort of exercise in catharsis. Instead her approach to live improvisation is raw and expressive, and cultivated over decades of ongoing exploration. Much of her recent studio work is for radiophonic diffusion, often based on field-recordings and with a politicized context. We discuss her unique approach to vinyl, the history of Canadian artist-run centres, and the intersection of art and sound from multiple perspectives. (Joseph Sannicandro)

Sound Propositions should be available wherever you get your podcasts, so please keep an eye out and subscribe (and rate and review, it helps others who might be interested find us). You can support Sound Propositions on Patreon if you are so inclined, or send a one-time donation via PayPal. I’m very grateful for any support, which will help ensure future episodes. Supporting the podcast on Patreon grants access to vocal-free versions of the episodes, as well as other benefits for higher tiers of support, including custom made mixes, soundscapes, collages, and other custom projects.

Bourdages has performed in Canada, the US, and France, and her works have been presented in England, Germany, Palestine, Portugal and Denmark. Esther B.’s 02_2004_La Lune (2004) in currently included in Audiosphere: Sound Experimentation 1980-2020, an exhibition at the Museo Reina Sofía in Madrid. Curated by Francisco López, the show includes a wide variety of artists, many of whom will be familiar to our readers. 21 aural works were commissioned for the exhibition, including work by Olivia Block, Lawrence English, Merzbow, and Yan Jun. Hundreds more works were selected for inclusion, “by a large and diverse group of artists that reflect the ‘atomization’ and decentralization of the scene.” López suggests the impossibility of conceptual and genealogical commonalities across all these trajectories, but also recognizes the interdependence and interconnection of so many of these artists.

The show closes on 15 February 2021, so there is still time to catch it if you are able to visit Madrid (which many of us, unfortunately, are unable to do during this pandemic). There are no visual objects on view, but the visitor’s physical presence in the exhibition space is required. Visitors can explore the exhibit in a variety of ways utilizing a specially designed app and high-quality headphones. While most of us cannot visit the show in person, the exhibition catalog is available as a free PDF (English / español), including essays from López, Salomé Voegelin, John Oswald, and others. (Also read a Spanish-language interview with Lopez here.)

Bourdages grew up in Abitibi and Bas St-Laurent, but has made Montréal her home since the mid-90s. She earned her MA in Art History at the Université de Montréal, with a thesis on Swiss sculptor Jean Tinguely. Originally drawn to Futurist experimentation with sculpture, Esther’s hunt for movement and sound led her to Tinguely, whose kinetic sculptures, or metamechanics, embraced a freedom that inspired Esther to pursue her own artistic vision unencumbered by formalist impositions of structure.

Esther and I first met in 2010, through a mutual friend in Montreal’s small but active free improv scene, not long after I had moved to the city. Seeing her perform, I was deeply impressed by her economy of means, how she could coax such soundscapes through the instrumentalization of nothing more than a portable turntable, built in speaker, and vinyl records. As she explains in this episode, she prefers to perform with acoustic musicians, rather than with electronic artists, because of the latter’s tendency to over-complicate things with technical means. There’s always a risk involved with improvisation, the chance that it just won’t click, and an over-reliance on complex technical chains introduces more opportunities to impede performance. For this reason, she sticks with her lo-fi efficiency. No multiple decks, no mixer, no effects chain, no stereo-out. One might draw a reasonable comparison to steve roden at his most minimal, even if their results are quite different. 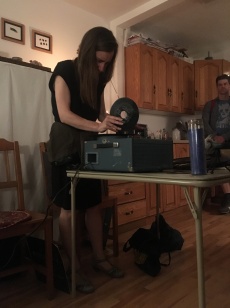 “Improvisation allows me to create raw, non-linear music peppered with altered sonic quotes and abstracted sounds,” she explains, “textures mostly produced by vinyl [records] that have undergone specific alterations—grinding, cutting, etc.).” Esther performs solo as well in various configurations with other musicians. She is a member of the turntable trio Vinyl Interventions, with Carrie Gates (Saskatoon) and Marinko Jareb (St. Catherines), presenting their eponymous workshop since 2002. Bourdages received her composition commission from L’Ensemble Supermusique of Montreal in 2009. In recent years, she has increasingly produced radio art pieces based on field-recordings, but her practice is still defined by improvisation. She quotes the singer Maggie Nicols:

This episode opens with an excerpt from Think about the rhythm, a soundscape Bourdages composed based on field recordings captured in Montreal during the pandemic of 2020, during public manifestations of solidarity, specifically demanding status for all and justice for Joyce Echaquan. Bourdages turns her microphone towards moments where people gather in solidarity, where people express their struggles in sound.

Bourdages is a member of CKUT radio, Montreal’s community radio station where she has c-hosted Café on Friday nights for a decade. She has also been an active member of RADIA, and radio is as much her milieu as live performances. During the pandemic, she’s had to adapt as both a radio producer and an art curator, and we took this opportunity to reflect upon art’s long and complicated relationship with technology, and to delve a bit into the history of artist-run centres in Canada. Akin to the alternative spaces movement in American art, the prevalence of artist-run centres and state funding makes it easier for a multiplicity of scenes to subsist, often cross-pollinating in unexpected ways.

Esther has helped to contribute to this scene as both a performer and organizer, with her concert series devoted to improvised music for acoustic instruments. Some of the many performers include a_dontigny, Gordon Allen, Olivier Borzeix, Isaiah Ceccarelli, Adam Kinner, Léon Lo, Philippe Lauzier, Erin Sexton, and David Turgeon. Many performers here come from very different contexts, and I’ve found musicians more willing to experiment and collaborate outside of any narrow niche or cliques. Many come from a jazz background, but just as many seem to have no musical background whatsoever. Music concrete and noise are common reference points, but almost anything goes here.

Nonetheless, there is a unique history here in Montreal and Quebec that often gets overshadowed by the media attention, mainstream and so-called underground alike, on English-speaking artists. Before moving to Montreal in 2009, I was mostly familiar with the scenes here through Constellation and Alien8. Esther turned me on to labels like Ambiances Magnétiques and No Type, introducing me to important artists including Joane Hétu, Jean Derome, Martin Tétreault,  and Nicolas Bernier. (Tenzier has done much to fill gaps in the archival record in recent years, moving between academic electronic music and free jazz.)

Bourdages is very active in Montreal’s art scenes as a journalist, critic, and curator.  I would recommend her interviews with sound artists Richard Garet and Navid Navad. She and I have also collaborated on several occasions: we interviewed Pole during Mutek 2011 for CKUT; performed as part of a telematic ensemble performance arranged by Esther B (Montreal) and Christopher Haworth (Calgary), at Eastern Bloc gallery, Montreal (2013); and Esther commissioned my essay on Matana Roberts for dpi. (2015). 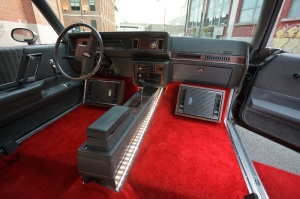 Esther Bourdages has worked at OPTICA, centre d’art contemporain since 2017. As a curator, she has worked on Sight & Sound festival, Grande rencontre des arts médiatiques en Gaspésie, and Les Percéides, Percé’s international festival of cinema and art.  She has been a long-term collaborator on contemporary art exhibitions with the Darling Foundry / Quartier Éphemère in Montréal, developing interdisciplinary projects that attend closely to material contexts and the insights of architecture, urbanism, and cultural studies. She has been involved in artist-run-centres such as Agence Topo and Perte de signal, and is on the board of directors of Eastern Bloc, Montreal’s leading space for digital art exhibition and production dedicated to emerging artists.

One curatorial project she is particularly proud of is Fugue urbaine, at Fonderie Darling in 2011.

While it was not an explicitly activist piece, she situates the work within an intensification of resistance to gentrification. Inside the car pictured here, visitors heard audio composed by artists Virginie Laganière and Jean-Maxime Dufresne. Read Esther’s essay about the work here.

Esther B. (with Jon Ascencio, Aimé Dontigny, Édouard Jeunet, James Schidlowsky, David Turgeon) – “Untitled 4”  (It is not easy for doug engelbart to give a conference when Youppi and Mad Dog are in the house, No Type/Bricolodge, 2004) 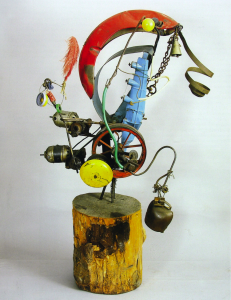