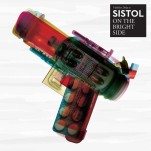 Sasu Ripatti can apparently do no wrong, though it is a bit surprising to see him reactivate this long dormant persona after almost eleven years. Why would a successful producer revive a one-off, nearly forgotten project from over a decade ago? This multifaceted Finnish musician has consistently impressed us with his versatility, from the grooving sophisticated house of his Luomo persona to his more abstract and minimal tinkering as the much-lauded Vladislav Delay. Following his debut The Kind of Blue EP in 1997, Ripatti offered his first deviation from Delay with the self-titled Sistol LP in 1999. Looking back at that record, with its cold tones, steady dance rhythms, and subdued bass, it stood out as something of an oddity in Ripatti’s corpus, especially contrasted against the tremendous output of Luomo, Uusitalo, Delay, and the various other projects over the next decade. The return to the Sistol persona therefore comes as something of a surprise, since the project seemed more of a transitional workspace than a fully formed persona. Surely Ripatti already has enough on his plate, with forthcoming Vladislav Delay Quartet, and the Moritz Von Oswald Trio (with Moritz Von Oswald of Basic Channel fame) occupying his time, just to name just a few.

With On the Bright Side, Ripatti returns to Sistol, yet the result bears little resemblance to that first incarnation. Instead, Bright Side is almost an inversion of the vibe on that debut, closer to his Uusitalo persona but with none of the warmth. The beats and basslines are far more pronounced than their muffled and buried counterparts, and the knob-twiddling and effects-processing are now sophisticated enough to hold the listeners’ attention. That first Sistol record reveals a future master in his infancy, tentatively exploring his influences at the time, a sort of playful, idiosyncratic take on the UK-rave and IDM scene. That self-titled record was re-released recently, remastered and repackaged as (Vladislav Delay as) Sistol, and accompanied by a disc of remixes by a variety of interesting producers. While I won’t offer a full review of that release here, it is worth pointing out that the remaster of the s/t album is a phenomenal improvement. The depth and space of the sound are so much fuller, more dynamic, and more nuanced that the record is almost completely transformed by the process. The remixes push the material in various directions, exploring the potential that was initially buried. One suspects that the experience of remixing those old tracks must have inspired Ripatti to write music as Sistol again. Perhaps it is the distance that made it an appropriate time to return to the idea of Sistol.

On the Bright Side puts the beats and bass front and center, eschewing the house-grooves of Luomo for a very different side of Ripatti. Despite the floor-ready rhythms and cautious melodies, Ripatti presents a record that feels mostly cold and industrial. Pitch-shifting synths, bouncing drum loops, and melodic bleeps-and-bloops take artificial tones as far as they’ll go. The abstract and attentive sound design of Vladislav Delay peers through at moments, but mostly we have a record that looks forward by looking back.

Every track is an interesting exploration in its own right, but certainly some tracks shine much brighter than others. The opening three tracks revolve around strophic dance beats, the narrative of each certainly appropriate for the dancefloor. “On the Bright Side” is the last of these three, and winds itself down to a gradual standstill, marking a turning point. “A Better Shore,” which falls right in the middle, is a definite highlight, with its memorable melody and pyramid structure. The sustained bass oscillation is gradually layered on, with less emphasis on the rhythmic elements compared to the intersections between the multiplicity of elements. Fragments that may have formed a percussive component will often slowly morph into a melodic role, while bass frequencies are shifted until they are suddenly perceived as lead riffs. This twisting and turning within a seemingly established set of conventions and parameters is what makes this edition of Sistol so effective and sophisticated. Songs like “Fucked-Up Novelty” and “Contaminate Her” recall Luomo in the way rhythmic elements are interestingly layered and loop together to create fascinating interplay. “Glowing and So Spread” and album-closer “Funseeker” are the most fun and bouncy: Sistol at its most elastic.

Both the past and present versions of Sistol feature a sort of writhing tonality, an emphasis more on synthetic textures and shifting parameters. Working within the confines of lo-fi tones and looping sequences, the wavering quality of this music, combined with the contrasting minimal, repetitive structures is downright endearing, not unlike Four Tet. And if all this isn’t enough, a two-volume remix set entitled On the Brighter Side has also been released to accompany this record, pushing the material even further.

The cover art seems telling as well, as with most of Ripatti’s work. The first Sistol record was just blank white with small text in the corner. On the Bright Side’s cover features what appears to be a raygun set against a white background. At closer inspection it is a series of drugs and pills imposed over one another in the shape of a gun. This strikes me as an apt representation for the entire project, particularly compared to the warmth and organic qualities of Vladislav Delay: comprised of totally synthetic components designed for recreation, everything isn’t as it first appears.