M. Sage ~ Data in the Details 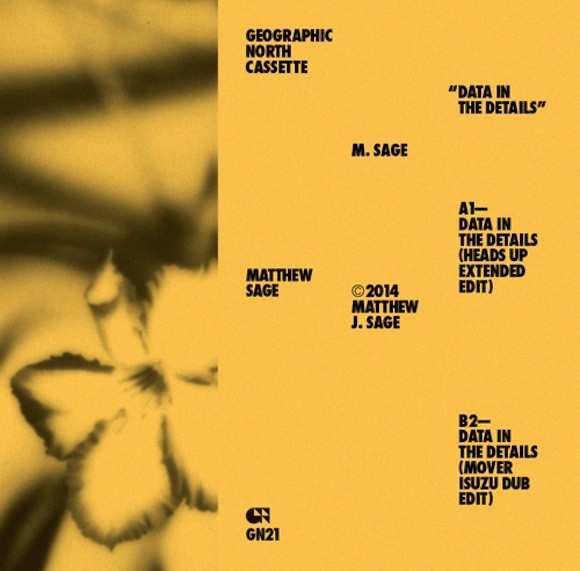 Regular readers of ACL might remember this excellent mix from last year, Half-Speed Flourish by Matthew Sage.  He played back old orchestral LPs at 16rpm, recording the result and mixing them together, giving us a window into his creative process and a closer look at the kinds of raw material he deconstructs to form his soundscapes as M. Sage.   I really appreciated Sage’s creative approach to that mix, but it wasn’t necessarily representative of other aspects of his work.   Over the last few years he’s released a steady supply of music through his own tape label, Patient Sounds, as well as on other labels.  His work as M. Sage conjures micro-worlds of sound, honing in on the nuances and textures of field-recordings.  The listener’s attention drifts between the multiple layers of sound, enveloped by a welcoming sense of disorientation.

M. Sage’s latest is Data in the Details, a tape that presents an interesting study in variation.  Just as his mix granted a new perspective on his soundscape works, this C30 presents itself as two-sides of the evolution of M. Sage.   “Data in the Details (heads up extended edit)” is an un-rushed exploration guided by its source material, its largely unprocessed and lo-fi field-recordings playing off minimal electronic tones that tend to drift in stutters and pulses.  It’s B-Side, “Data in the Details (mover isuzu dub edit),” offers a surprisingly upbeat exploration of the same material, this time driven by a tropical rhythm.  The same elements are present- the lo-fi recordings, minimal electronics, dub techniques- but the steady rhythm grants new emphasis.

Still primarily an explorations of textural soundscapes, Sage’s work has become increasingly interested in rhythm. This dub edit is seemingly something of a point of demarcation.  I wouldn’t be surprised is his his next release is a full-on beat tape, though certainly still defined by the idiosyncrasies of field-recordings and careful attention to texture.

Following labels is one of my primary means of discovering new music, so there is nothing I appreciate more than a well-curated label with a coherent aesthetic.  Sage’s own label, Patient Sounds, takes this approach and so its no surprise to find him appearing on labels with similar commitments.  Geographic North, an excellent label based in Atlanta, is a good fit for M. Sage, with a diverse catalog that still manages to project a recognizable identity.

M. SAGE has given us something special, a unique mix of half-speed orchestral flourishes that reveals aspects of his aesthetic approach as a mix that can be enjoyed purely on its own terms.

So what’s going on here?  Set this up for us.

For a while now, I have been using old orchestra LPs as source material for my recordings. One of my favorite tricks is to record snippets of the introduction flourishes from old big-band era tracks and cut them up into sample arrangements. The giant sweeping chords that open a lot of the music from this era really captivates me…because these intros are usually far more melodically complex then the rest of the song that follows.

I have an old Califone 1420K record player that has a really worm vintage solid-state tone, and the table can run at 16rpm. I jacked the table into my computer, and recorded the opening flourishes from some tracks. I also have a few of these saved, in my base of sounds, that I scooped from AM radio a while back. I have used several of these tracks in M. Sage recordings, primarily “a sunday kind of love” which is the root sample for “prairie bell” from my cassette “Lux Collapsing.” The rest are a mystery.

Tell us about yourself.  Who is M. Sage?

I am from Fort Collins, Colorado. I am currently preparing to release a new double LP of material I recorded and composed with some friends over the last year. The album comes out this December. I also have tons of other recordings available through Patient Sounds, the label I own and operate. We have released 45+ tapes and have our first 2 vinyl releases coming this winter.

Learn more at his site, and hear more of his sound collages at his soundcloud page.

unknown (scooped from am radio)