Originally published at The Silent Ballet

The music of Sigur Rós has a way of impressing melancholy and hopefulness at the same time. Their music is awfully powerful, and, though the live recordings are flawless and the performances stellar, there is no substitute for actually being-there.  Unlike any other “concert,”  a Sigur Rós performance is like going to church, when it still meant something, when it was still filled with unknowns and wonder.

Heima, meaning both home and homeland in Icelandic, captures the spiritual majesty of Sigur Rós’ music and their homeland as completely as is possible, short of being-there for oneself.   The DVD includes two discs, and is certainly worth the $33 US for the deluxe edition, which includes a beautiful 116-page hardcover book of photographs.  The first disc, which has been screened in theatres and venues all over the world, is a 93-minute documentary, following a series of free performances the band gave in Iceland after their Takk… world tour.  It also follows the band as they play a protest concert at Snæfellsskála, where a dam to produce electricity (and power aluminum factories) has been built.  They played completely acoustically, opting not to use generators, since they were protesting an electric power plant.

The whole thing is unbelievably gorgeous, and the commentary, performances, and remarkable locals are beyond description.  There seems to be so much power underlying it all — the concept, their love for what they do, their real authenticity and resistance to commodification. Even though they are selling a product now, the sales of the DVDs have financed the free concerts, in a manner of thinking. They also make sure the product itself remains a worthy souvenir: a piece of art, 116 pages of stunning photos contained in elegant packaging, and very limited edition prints of three of the photographs given out to lucky fans at the various free screening given around the world on the day the DVD was released.

Disc two features the performances uncut, along with bonus footage and more performances, totaling over 150 minutes. The flim’s director, and the directors of photography, have done an amazing job, juxtaposing the splendor of the country with the band, the audience, and every inch of the venues from different angles. Dean DeBlois, the director, is a Canadian who has made such films as Mulan, Lilo & Stitch, and the popular ‘80s Canadian TV series The Raccoons.  If his cartoon credentials don’t inspire much confidence, keep in mind he also made some of the band’s videos.

What is extraordinary about the DVD is the statement the band is making.  They showcase local Icelanders who would otherwise not have the outlet to share both the mundane and extraordinary.  The film shows us a local artist, Páll stefánsson who lives with his mother in a hobbit-like home built into the hills.  He designed and built the band a chromatic stone marimba from pieces of shale he found, testing hundred of pieces to find the correct pitches.  He also makes paintings and other instruments from rhubarb his grandfather planted.  The film also showcases other fascinating characters, such as the singer Steindór Andersen, who performs ancient Icelandic verses from the Edda, and the collector who has turned his home into a museum of Icelandic popular music.  In addition to these profiles, the performances themselves and the venues they’ve chosen, as well as the reactions of the local in attendance, make this an extraordinary piece of art.  One location even features a local marching band who play the horn parts. The songs from ( )  in particular seem to stand out, as the acoustic timbres and slower tempos give the tunes a very different mood, like taking a bronze statue and remaking it from wood.

My personal favorite location is the abandoned fish factory in Djúpavík, a town in which only two people live year-round.  The factory was built many decades ago and closed down after only a few years due to over-fishing.  The sight of Jonsi and Amiina playing  “Gítardjamm,” a new song, surrounded by a decaying building is lovely and bizarre, the crowd sitting huddled behind the view of the camera.  Its cinematography is remarkable, shooting every bit of the factory and producing a thoroughness that is beautiful and almost obsessive. The final performance of the tour in front of a huge crowd in the capital city of Reykjavik is equally awe-inspiring, though on the opposite end of the spectrum.  The band performs “Popplagid”  (Untitled 8), and a compilation of scenes from the rest of documentary show images from around Iceland and scenes of the locals walking to the various performances.  The documentary, like the song, builds to an incredible climax. As the crescendo leading to the climax of the song begins, a giant screen is drawn across the stage, obscuring the band as images are projected onto it, with a bombastic light show. Sigur Rós are here at their loudest and most colossal.  Like a good songwriter,  DeBlois follows this stunning climax with a fitting dénouement, “Samskeyti” performed in a small wooden house lit by candles.

Heima is an important and intriguing project however, and will no doubt go down as a classic.  The tagline for the film truly sums up the film perfectly:  Heima. A tribute to the people and places that make up ‘home.’ 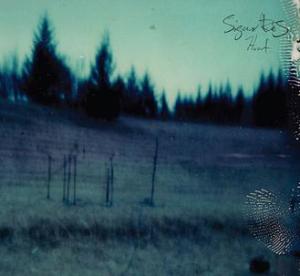 Ten years into their career, Sigur Rós have released a beautiful film and companion record, showcasing their range and growth as artists.  Hvarf/Heim is a double EP, and though it is excellent, is no substitute for a new LP.  Any  fans coming to these records with such expectations will likely be disappointed.  Hvarf, which means ‘disappeared’ in Icelandic,  features three new, unreleased songs, and re-recording of two songs off Sigur Rós ‘ debut, Von,  which have become popular in their reinvented live forms. The three new songs are varied, but still stick mostly to Sigur Ros’ past formula of smart songwriting, crescendo, and melancholy.

Named after Georg’s eldest daughter, “Salka” was recorded during the sessions that produced ( ) and it shows. “Hljómalind” is rather straightforward track from around the time of ágætis byrjun and though the band plays it down as just a silly three-chord pop song, it is actually quite a good three-chord pop song  with a memorable chorus.  “Í Gær” is probably the standout track, being the most dynamic and the most foreboding. Beginning with a vibes and xylophone, the chords instantly sound both reminiscent of childhood as well as slightly carnevalesque, until just before the minute mark when a single drum-beat breaks the quiet like a canon and the guitars crash in.  Quite a dramatic song, it was written during the bands ‘prog-rock’ phase between their second and third records, in which they also wrote some the b-sides to the Ny Batteri  EP and  the Angels of the Universe soundtrack.  Though the band has abandoned this direction, I think many will agree it was a phase that produced some great music.

The re-recordings, staples of the band’s live set, deserved a proper studio version, so  consider it a tenth birthday present.  “Von,” the title track off the aforementioned debut, has evolved impressively, almost doubling in length.  Not to belittle the original version, but this version sounds more sophisticated, having grown along with the band itself.  The addition of the strings and other sounds, not to mention the slower tempo, changes the mood completely.  The fast paced drums and ambient noise are replaced by a hypnotic drum-beat played with mallets, and the fleshed out arrangement makes the song sound fuller. Sigur Rós have effectively re-written the song.  The closer, “Hafsól,” has evolved as well, though it has also become about 2 minutes shorter.  This new studio version features the now well-known bass line played with a drum stick, and toy instrument outro, popularized from their live performances.  The song itself has been tightened up, transforming what was basically a 12-minute ambient pieces into a something that reflects the band’s current sound.

Sigur Rós has grown tremendously since their inception, and their distinct sound has been perfected and evolved, if slowly.  The five songs on Hvarf don’t offer us anything radically different, but so what?  Sigur Ros are still one of the most original and powerful musical artists on the planet.  A new listener will be awed by the power and beauty of this release, and hardcore fans should treasure having such excellent production on these two reinvented songs.  The new songs, of course, will only serve as a tease until the next full-length is released.

Heim, the second of these two EPs, means ‘home’ and features six mostly acoustic songs recorded in various locations around Iceland.  After returning from their 2006 world tour with Amiina, the two bands played a string of free, unannounced concerts in Iceland.  The live and acoustic version of “Heysátan“ was filmed outdoors in front of a small, abandoned country home. Surrounded by traditional wooden statues of sailors that are beautifully shot and edited, seeing Jonsi and co. playing wearing mittens and winter hats is one of the highlights of the film.  The closer on 2005’s Takk…, this live version is stunningly beautiful, fleshed out by a brass group called the Horny Bastards.  And if you listen closely, you can hear the sound of crickets chirping in the background. Footage of these performances, along with an even more intimate performance recorded in 2007 for friends and family in a café, make up the musical portion of Heima, the documentary this release is meant to accompany.  All six songs are featured in the recently released documentary directed by Denni Karlsson and Dean DeBlois.