In “Get on the Mic” Geoff Harkness argues that “the studio is essential to the culture [of rap] in ways that it is not for many other music genres,” because it has a particular function as a symbolic space of socialization, professionalization, and legitimization that is less significant in modes of music which place more emphasis on live performance and theatrics (rock, pop, classical, jazz). (85) Importantly, Harkness recognizes that this essence—rap as a studio art, as opposed to performance art traditionally associated with music—is characteristic of electronic music in general. (85) As such, there are wider implications to consider that are raised by this essay explicitly or otherwise, which I would like to consider more closely here. Since “performance” based genres such as rock and pop are equally studio-based in today’s market, are they holding onto a paradigm [the stage] that limits how we envision them? Has the studio come to occupy a similar symbolic space in these genres? Is this actually a new phenomenon or are their historical precedents which might have resonance with the current phase of the cycle?

Harkness chooses not to focus on aesthetic or sonic qualities already studied by others (what musicians do in the studio: sampling, spatialization, intertextual references, lyrical or content analysis) but instead to consider “what studios do for musicians” through his ethnographic research based on observing live performances, recording sessions and interviews with 135 Chicago-based musicians, producers, and rappers. (85) Harkness’s essay opens with a simile, comparing the studio to a casino, but differentiates these two spaces by emphasizing that although both may seem like sites of leisure, the studio is actually “all about work.” One of the most common metaphors for working in the studio in hip hop is that of “the Lab,” but since Harkness doesn’t consider lyrics in his analysis, the implications of this common metaphor remains unarticulated. Countless rap lyrics (and their re-use as samples/scratches in beats) both support Harkness’s argument, and deepen it. (82) [See appendix below for some obvious examples] “The Lab”  represents work and legitimization, a social space as well as a place to refine one’s product. Just as a gun is often used as a metaphor for one’s voice, the Lab is counterposed to illegal drug trade, the Lab as a place where one ‘cooks’ up a product, work but also experimentation and skill. The drug trade functions either as a metaphor (for hustling to make money and/or the addictive quality of the product), or as an alternative means of making a living (ie. I don’t need to carry a gun or sell drugs, because my mind is my weapon and my rhymes are just as desirable). This is all expressed within an admittedly very masculine context, it should go without saying, something equally applicable to the history which concerns Susan Schmidt Horning, and which she gestures towards weakly in her essay “Engineering the Performance: Recording Engineers, Tacit Knowledge and the Art of Controlling Sound.” 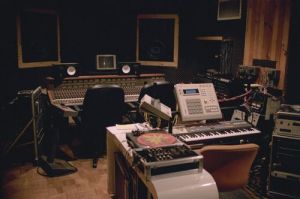 Harkness confines his investigation to underground rap music produced within Chicago, though he maintains that his ideas are equally applicable to other genres and locations. The formation of hip hop music as inherently studio-based rather than performative (as was early party-oriented hip hop music, the parallel evolution of house music, the toast culture of Jamaican soundsystem culture that was a core influence on hip hop’s birth in the Bronx 40 years ago) was a result of the availability of affordable “media-creation tools” in the 1980s and 90s, according to Harkness. (87) He sees this as an important moment in a growing tendency away from “pure audiences” towards “prosumers.”  Especially when read alongside Horning’s essay, I think we can trouble this idea of “prosumer” somewhat, and in so doing read between these two essays to produce additional insights and further questions. Jonathan Sterne’s now decade old essay“Media or Instruments? Yes” argues that the discussion of more recent trends in hybrid media/instruments (ie. sampling, DJing, etc) brings into relief the limitations of academic distinctions such as media and instrument, demonstrating that the significant overlap between these categories pre-exists the advent of audio reproduction itself. He argues that this fact has long been understood (tacitly) by practitioners and encourages researchers to catch up and to update our categories accordingly. 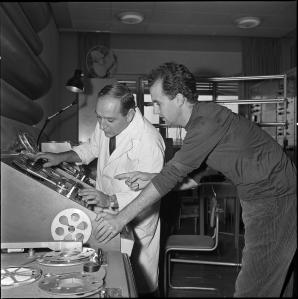 In Harkness’s narrative, it is the home studios created by rock stars in the ‘60s and ‘70s that set the stage for a transformation of the symbolic role of the studio. (86) [Though we might find many earlier examples; consider the role engineers in early, generally state-run, electronic music studios, or the evolution of the engineer/producer in Motown recordings, labels with strong production-driven editorial visions such as Manfred Eicher at ECM, the role of the engineer in Jamaican music and of the dub in sound system culture, etc, all of which gesture towards the evolution of engineer into producer (as composer).] (Cf. Michael E. Veal, Dub: Soundscapes and Shattered Songs in Jamaican Reggae; Virgil Moorefield, The Producer as Composer: Shaping the Sounds of Popular Music.)

But it seems to me that in fact “recording companies” have always primarily been in a different business, namely selling consumer electronics products. This is more exaggerated in the post-war period but to some extent was always true. Music is just the “content” designed to sell big ticket items, and it is no mistake that the big recording companies tended to be (and still are) subsidiaries of electronics corporations (RCA, SONY, etc). This aspect of the business is central to any study of amateur or professional studio environments. Harkness details the rise in centrality of the Digital Audio Workstation (DAW) ProTools, but neglects to mention a very important detail. One reason for ProTools’ continued success and market dominance is that Avid/Digidesign is not primarily a software company; at least until the release of ProTools 9 in 2010, the use of ProTools software required the use of specialized hardware (primarily analog-digital interfaces), and Digidesign’s hardware are still the most common option for most users of the DAW.

So I ask, what is actually new and significant about so called “prosumerism” in an industry which has always been driven by consumer electronics? The idea of “rent” and “subscription” (monthly ISP contract, Spotify, etc) perhaps? Does a slow shift towards generative and AI-based musics (perhaps as a 21st century form of Muzak) not further confirm the devaluation of “music” as simple content to sell hardware all along? What about in the time before the ubiquity of audio reproduction and radio, when the music industry was driven by the sales of sheet music and musical instruments?  Were those customers not also “prosumers?” What’s really at stake in ths distinction? A devaluation of art into mere “content” to hide the new rent? A displacement from the crass consumerism and fetisihization that comes with consumer electronic products with talk of “liberation,” “revolution,” and “democratization?”

Special thanks to Mark Pedelty.

Nas – “What Goes Around” (2001)
“Me and my niggas share gifts every day like Christmas/ Slay bitches, and party everyday like this is the last/ I’m with my heckles, connectin’ and we hittin’ the lab/ This is my level, fuck if it get you mad”

Frank Ocean – “Songs for Women”  (2011)
“Now I’m in the lab, always working late/ Always sleeping past the breakfast she makes”