Anoyo, which means “the world over there,” is the counterpart to last year’s glorious Konoyo, or “the world over here.” While the two are certainly closely related, both built around the prominent contributions of members of Tokyo Gakuso, it would be reductive to see Anoyo as merely a third disc of Konoyo. Tim Hecker has released companion records before, with Ravedeath, 1972 (2011) and Dropped Pianos (2011), still two standouts in his impressive back catalogue. Konoyo and Anoyo have a similar relationship, and in both cases seeing the more stripped down version of each album brings greater appreciation to the full-length while also standing up entirely on its own merits.

The artwork of that earlier pair confirms their close relation, while the divergences between Konoyo and Anoyo hint at a different filiation. The “dropped pianos” of the title refers both to the literal piano drop pictured on each cover (a strange ritual held annually at MIT) and also to the piano sketches upon with Ravedeath was constructed, which were also “dropped” from the final mix. The white cover of Ravedeath is turned black with Dropped Pianos, revealing the sketches which had been whited-out. 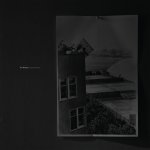 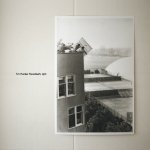 Is Anoyo a comparable inversion of its predecessor? Everything about this pair of recordings seems to invite this reading, however their covers seem to draw a much starker contrast, even if the titles and the music explicitly underlie their relation. “Hatred of Music” was a recurring theme on that 2011 LP, reinforced by the image of the literal piano drop on the cover(s). Images visualizing the literal destruction of musical instruments have accompanied Hecker’s more recent works as well, to whit, a keyboard aflame and drum sets burning. But the last, an image posted on Instagram in January while teasing Anoyo, (allegedly) had nothing to do with Anoyo after all, just a screenshot of a video of ISIS militants burning a trap kit. Yet one could easily imagine the EP bearing this cover, perhaps over-determining its meaning with regards to its predecessor. Instead, Anoyo’s cover shows us “the world over there,” a defamiliarized cube against a stark black void. 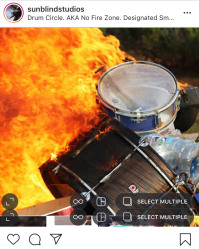 When we speak of “the world over here,” we are already conjuring its opposite, that which is not here. Konoyo is marked by this absence, a musical negative space inspired by conversations with a recently deceased friend, perhaps a conjuring of that lost friend as well. This loss served to bring together a group of musicians for the most collaborative and minimal record of Hecker’s career, featuring prominent contributions from Tokyo Gakuso, a gagaku ensemble, keys from Kara-Lis Coverdale (his collaborator since Virgins, and a brilliant composer in her own right), cello from Mariel Roberts, and technical assistance from a number of others, including Ben Frost, who has contributed to every Hecker album since Ravedeath. The late Jóhann Jóhannsson introduced Hecker to gagaku music, and his absence here is strongly felt. (Jóhannsson directed the Icelandic Choir Ensemble and did the choral arrangements the excellent Love Streams.) 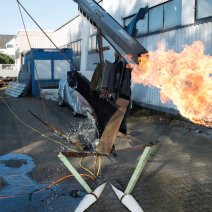 Konoyo was the most minimal we’ve heard Tim Hecker in a long while, perhaps ever, and Anoyo even more so. It is stripped down, allowing more space for the airy textures of the Japanese wind instruments, but it is not a skeleton of its predecessor in the style of Dropped Pianos. Though it may feel as though something is missing, this is not a deficiency. Konoyo is a record that’s already defined by its negative space, in contrast to the dense layers that make up so much contemporary music (Tim Hecker’s back catalogue not excepted). Anoyo is even more restrained, more confident in its stark absence. This is not to say that Hecker is absent—this is still his work after all—but his contributions here serve to prop up and add form more than obscure. Coverdale’s keys and Roberts’ cello have vanished, and consequently Anoyo places the focus more squarely on the contributions of Tokyo Gakuso, no longer hidden behind the opaque screen of Konoyo, yet still very in dialogue.

And dialogue between the here and the there, the present and the absent, is the tension that makes this music affective. Gagaku is a form of Imperial Court music also associated with Shinto temple rituals, and in fact Hecker recorded Tokyo Gakuso performing in the Jiunzan Mandala-Temple Kanzouin on the outskirts of Tokyo. Such music, previously confined only to courts or sacred spaces, is made profane when it is repackaged for general circulation. This is not a world away from Hecker’s treatment of church pipe organs. There are of course many examples of this, such as Tarawangsawelas, who have done something similar Indonesian sacred music in an updated context, but of course it is their tradition to experiment with. Without Tokyo Gakuso, Hecker’s engagement with gagaku would be far less successful, but nonetheless Hecker’s outsider status gives an added level of remove, one which resonates with the themes of loss, grief, and distance. Whether this is judged to be a good or bad thing will be up to the individual listener.

This engagement with gagaku can’t help but call to mind Hecker’s 2012 collaboration with Daniel Lopatin (Oneohtrix Point Never), considering that Instrumental Tourist seemed to be poking fun at just this kind of cultural appropriation. But as with everything, context matters. Hecker isn’t blindly pulling from a World Music sample pack, mashing up gamelan with tablas and koras. While his record his Lopatin was meant to skewer this sort of thing, ironic distance wasn’t enough to elevate it into something more substantial, and ultimately one might find it guilty of just the sort of thing it was meant to critique. Here, instead, Hecker is in dialogue with Japanese Gagaku beyond incorporating the shakuhachi into his already established musical palette. Konoyo and Anoyo are the products of working and recording with the actual Japanese musicians from Tokyo Gakuso, the results of a deep conceptual alignment with the history of this music, careful consideration of the boundaries and limitations of pre-recorded musics, what it means to translate a music intended solely for the Imperial court into modern music no longer facing such constraints, and a formal meditation on the theme of loss and negative space.

Tim Hecker’s music can often be overwhelmingly loud and dense. While this can make some listeners uncomfortable, surrendering to this experience can be transcendent. The use of gagaku music lends itself to this, conceptually, much more than one might expect at first, yet it remains a dialogue that has propelled his music forward. As a court music, gagaku is a form of music that demarcates strict social distinctions. Also performed at Shinto shrines, it is a music that evokes the barrier between life and death, the world over here and the world over there. Bringing Hecker’s music together with gagaku, even if in places the differences create tension (between tuning systems, between value systems) only serves to make the end result more powerful.

Hecker’s work with wind instruments here recalls past work, such as “Radiance” and “Amps, Drugs, Harmonium” from Virgins. The non-album track “Amps, Drugs, Mellotron” put even greater emphasis on the woodwinds, perhaps the most direct precedent to the direction ultimately explored in collaboration with Tokyo Gakuso. Three of the four credited gagaku musicians are performing with wind instruments, the key melodic and textural elements of both records. The ryuteki, played by Takuya Koketsu, is a transversal flute, and the hichiriki, played by Motonori Miura, is a breathy double reed flute, very similar to a duduk, with distinctive haunting sound. The shō is a remarkable free reed wind instrument with 17 bamboo pipes, played by Fumiya Otonashi. The vibrating reeds give it a sound distantly related to that of an accordion, and is responsible for some of the lovely streaked tone clusters that mark both albums. Lastly, the uchimono, played by Yoshiyuki Izaki, is a series of percussion instruments, seemingly mostly pitched drums. The fact that the tunings of these instruments does not align with A440 which has become the standard in recorded Western is used to great effect. Hecker’s own contributions seem to often fluctuate in tuning, perhaps the result of the tape transfers, giving an otherworldly effect, for instance, on Konoyo‘s “This life.”

The repetition of Konoyo‘s closer “Across to Anoyo” settles into a hypnotic percussive loop, against which a synth squeals and eventually breaks down, fading into only flailing cries. It isn’t so much a resolution as a mournful acceptance of grief. Such an ending certainly invites continuous listening with Anoyo. An Imaginary Country (2009) worked perfectly as a CD, as “200 Years Ago” runs into “100 Years Ago” and back again. Listening to Konoyo and Anoyo on endless loop evokes a similar feeling, as together they complete a musical Möbius strip.

Anoyo opener “That world” begins with a plucked string instrument, a koto or perhaps a gakuso itself, though it doesn’t appear to be credited. (Or could it be a guitar manipulated to blend in?) Occasional drum strikes make time against this arpeggio, in what appears to be the origin of aforementioned percussive loop in “Across to Anoyo.” These chords are effected, blurred, and reversed, drawing out a drone against which the gagaku wind instruments play delicate melodies in the background, gradually accumulating. While the synth articulates a bass line, chords from the string instrument flitting by, the emphasis slowly shifts towards the melodic content of the winds. An unhurried nine-minutes in length, “That world” never drags, perhaps because the percussion makes such a brief appearance early on it is easy to not feel the passing of time. While calling back to Konoyo, “That world” functions as a kind of overture for Anoyo, introducing all of the key elements.

The percussion gets pride of place in the following track, “Is but a simulated blur,” dancing against the repetition of an ascending synth melody. After a flurry of rhythmic tension and release, the A-side of Anoyo ends with “Step away from Konoyo,” a beautiful sound bath that recalls “No Drums,” the calm mid-album respite of Ravedeath. “Is a rose petal of the dying crimson light” accomplished something similar on Konoyo. These tracks stand out in Hecker’s catalogue for their convention beauty, without bombast, dissonance, distortion, or abrasive sororities.

“Not Alone” begins with a low bass hit, a carry over from the final seconds of “Into the void.” That low pitch thunders in the background, while higher pitches drums tap out a pattern which gradually increases in tempo. While this formula created a disconcerting feeling when performed on “simulated blur,” here the affect is different. This opening pattern initially leaves so much space in between each hit that faint voices can be discerned in the background. The tempo slowly builds, quickening and releasing, quickening and releasing. The effect is a metric crescendo of rhythmic intensity rather than volume. A spare synth melody slowly sounds out and repeats, the relation between the two elements intimate, but disconnected.

The eight-plus minute long finale “You never were” balances the long opener, but where there was a sense of peace to “That world,” the closer reintroduces dissonance, the densest moment on Anoyo. Building on the drone of the shō,  Hecker constructs a cluttered and anxious climax as synth loops distort, pitch fluctuates, and sound stutters in and out. A bouncy Rhodes melody emerges in the final third, occasionally dipping out of tune, but the promised resolution never comes. The main melody cuts out at 7:49, delayed notes flying out of tune, the shō crying out as it all evaporates into the void, inviting us to begin again with “This life,” starting the cycle all over again. (Joseph Sannicandro)